Of course I named the show after the great album by the Smittens and I pay homage to the band by using a clip of their song 11:11 for my theme. I hope the band doesn't mind, but when I have talked to various members of the band after shows they seem like nice people whom I think would be good with it.

I also use this name for my DJ night happening occasionally at the Jane Bond in Waterloo, Ontario, Canada.

Note that the links to shows older than 6 months might not be working, if you really want those shows please send me an email and I can get them to you. (Note that prior to 2018 I called my podcast FireballXL5, so don't be confused if you look at an old setlist)

Special thanks to Jeff Woods for finding my a place to host my mp3s! 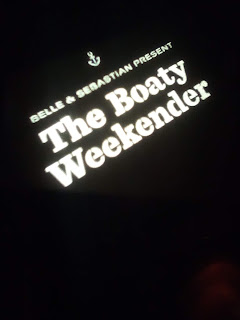 This is a recap of my experiences attending the 5 day Boaty Weekender Cruise organized by Belle and Sebastian in the Mediterranean Sea in August of 2019.  Although we made a 2 week vacation out of the trip with a few days in Barcelona before the cruise and after along the Costa Brava, this will just be about the time on the boat.

For those of you who don't know, Belle and Sebastian curated a music festival back in 1999 called the Bowlie Weekender at a holiday camp in the UK and then did it again in 2010 (read more about that here: https://en.wikipedia.org/wiki/Bowlie_Weekender ).  So for the 20th anniversary instead of doing a festival on land they decided to do it on a boat and called it The Boaty Weekender.  It was done in association with Sixthman, a company that specialized in entertainment based cruises.


A few years back when B+S first proposed their idea to their mailing list I thought to myself that if they every actually did it I would have to go.  As well they had a survey for their fans about what they would want on a trip (I suggested trivia, more on that later) and a result of filling out the survey I was on the pre-sale when the staterooms started to be on sale.  My travelling partner and I decided that if we going to do it we would get a room with a balcony and with getting in on the pre-sale I was able to book one of the least expensive staterooms with a balcony.


It was interesting that like us, most people on board were first time cruisers, so we didn't know exactly what to expect.  It turns out that a ship is a pretty good place to have a music festival, all of the stages are relatively close, the food is great, and if you want to chill out, your stateroom is never too far away.  There was a buffet restaurant open pretty much all the time that was included in the price that I thought was quite good plus you could also quickly grab some food and take it back to the stages if you really didn't have a lot time between bands.  In order to make sure nobody went hungry, there were also snack stations set up at the late night shows with a variety of fried foods and desserts.  They are also (with good reason) very concerned about hygiene, so whenever you walked into the buffet there was a lady ready to spray some sanitizer on your hands with the phrase "washy, washy".

Although the cruise was on the Norwergian Pearl, the logistics were handled by a company called Sixthman who specialize in entertainment cruises from KISS to Melissa Etheridge and comedy to wrestling.  They have been doing it for over 10 years and thus the entire trip was very well organized, everything from pre-trip information, getting people on board, all the shows and everything else, and then getting people off at the end.  It was the first time they had a cruise outside of the Caribbean, so it was a bit of an experiment on their part.


Just like a regular music festival there were multiple stages of different sizes with usually 2 to 3 bands playing at any time.  Being a bit of a completeist, I did my best to see at least some songs by all of the 19 bands playing on the boat.  This took a bit of planning and in the end I managed to see 15 of them, with the others being very hard to fit in.


Of course my first priority was to see all three of the Belle and Sebastian shows, this resulted in seeing about 4 and half hours of them playing live, all without them playing the same song twice.  Their first show was the first night at the "welcoming" concert along with the required Sixthman opening toast with the band on stage and the audience behind them.  As it turns out I was wearing a red t-shirt and was close to the front of the stage, so it is pretty easy to pick me out of the photo:


About half way through the show a very nice couple from Texas whom we talked to before the show moved and let us get right to the front of the stage.  Here is a video of just how close it was:

Before the trip I was asked about what song I would most like to see them play, this was apart from the more famous songs including The Party Line (which has a special place in my heart because the video was shot in Toronto and I was in it, read about that here ).  For the song I wanted to hear I choose "If she wants me" and sure enough during their second show they played that one along with perhaps some other deeper tracks.

For their last show they did a full performance of the album "Fold your hand child, you walk like a peasant", which I found out in an interview with Stuart of Belle and Sebastian that a few of the songs they had never done live before.  After playing the album they did the song "Legal Man" backed by a group of children from the ship's children's activity group.  Then they called out for requests from the audience and actually kept track of them and played a number of them.


I think the only other band that was able to not repeat any songs during their multiple sets were Yo La Tengo, who I saw every time they played, but not for their entire shows.  After making room for these two bands on my schedule, my next priority were a few bands that I had seen before but wanted to see at least one complete set (Camera Obscura, Alvvays - both of which put on great shows) and then I tried to fit in as many of the other bands as I could.  It was not possible to see some bands, for instance Elisabeth Elektra only played one show which was during the "Fold your hands" concert (I felt bad for her) and others only played after midnight or were in conflict with other bands I wanted to see.

One nice part about a festival like this is finding out about bands that you didn't know about before, here were my favourite discoveries:

Nilüfer Yanya - My favourite discovery from the trip, I have already downloaded her latest album, I'm very glad I was able to catch her on the Spinnaker Lounge the last night of the cruise.  In concert there was a live saxophonist which really added a nice grove to her already very groovy songs.

Whyte Horses - My next favourite discovery, really nice soulful psychedelic pop with a fun video presentation behind the band

Tracyanne & Danny - It is not surprising that a member of Camera Obscura would come out with beautiful indie pop songs. 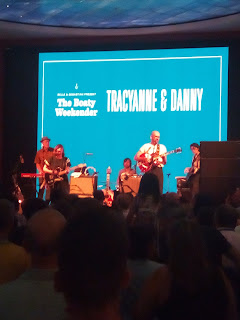 Kelly Lee Owens - well I had heard some songs from her on the Sirius XMU Blog Radio program Gorilla vs. Bear, but seeing her live was a treat as she put on a very good live performance coupled with interesting video behind her.

Japanese Breakfast - again I have heard them on Sirius XMU, but it was nice to hear more of their songs live. 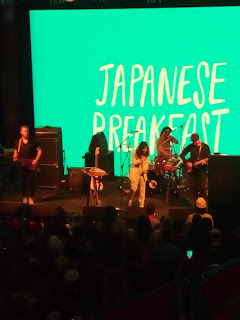 Then there were the bands that I knew about and most of whom I had seen before, all of which I managed to catch at least partial sets: Teenage Fanclub, Django Django, Buzzcocks, The Vaselines, Honeyblood, and HINDS. 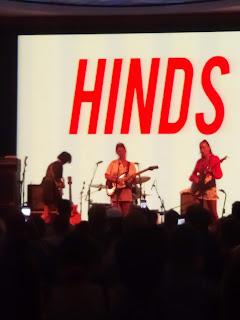 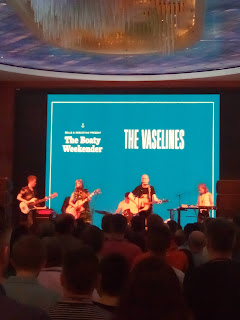 A few other highlights:

Talking with Norman Blake from Teenage Fanclub (whom I have met quite often as he lived for a while in the same town in Canada), the Buzzcocks tribute where various members of other groups came out and sang with the remaining band, seeing a fun set by HINDS whom always seem to be having a great time, and hearing the great pop songs of The Vaselines. 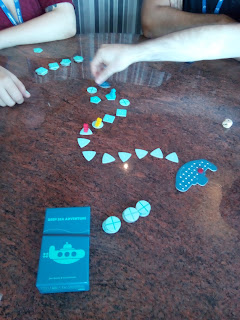 I felt a certain vibe on the cruise when you are among like-minded people.  Everyone I talked to during the cruise at the concerts or in the restaurant were really friendly and interesting.  In particular I found out about people playing board games in the restaurant and joined them for a few nautical themed games (thanks to Noami and Paolo). 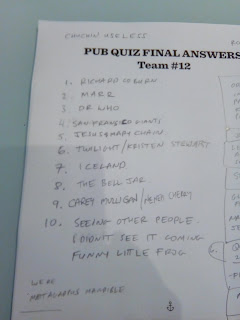 As part of a pub quiz team we manged to finish around 7th of about 43 teams, this only worked because we were a mix of Canadians, Americans (Mary and Clark), and British (Jane, Nick, Belle, and George) as the questions required a mix of North American and UK knowledge. 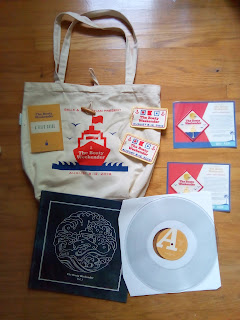 Another nice touch were little "gifts" that were left in our staterooms every night: a vinyl album of bands on Boaty, a Boaty cloth bag, a Boaty badge, and finally a Boaty luggage tag.


Overall, sure the trip was expensive as cruise boat's aren't cheap, but it was totally worth it in my opinion, seeing Belle and Sebastian play, all of the other great bands, and being together with a bunch of fun people. 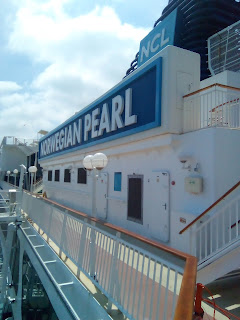 Posted by Frank No comments:

This show was dedicated to my experience on The Boaty Weekender, a boat cruise organized by Belle and Sebastian where they got together 20 or so bands to have a music festival on a Norwegian Cruise lines boat that went from Barcelona to Sardinia (Italy) and back again. You can read about the trip in more detail (with pictures) here: https://thecoolestthingaboutlove.blogspot.com/2019/08/the-boaty-weekender-2019-recap.html

Best song I heard since the last show: Whyte Horses - The Best Of It, see the lyric video for the song here: https://www.youtube.com/watch?v=4D-hL46dEJ4

Links from the show:

Link to The Guardian story on The Boaty Weekender:
https://www.theguardian.com/music/2019/aug/13/belle-and-sebastian-boaty-weekender-indie-festival-cruise

You can download the latest show directly here:
http://trepid.org/TCTAL/2019-08_final.mp3

For information on how to sign up for the podcast or join the Facebook group, see the bottom of this message.

The Coolest Thing About Love Setlist - August 2019
TALK - Theme
Whyte Horses - The Best Of It
Nilufer Yanya - In Your Head
Japanese Breakfast - Everybody Wants To Love You
Tracyanne and Danny - It Can't Be Love Unless It Hurts
Kelly Lee Owens - Evolution
TALK
Belle and Sebastian - If She Wants Me
Camera Obscura - The Sweetest Thing
Yo La Tengo - Cherry Chapstick
Teenage Fanclub - Everything Is Falling Apart
Alvvays - Party Police
TALK
Buzzcocks - What Do I Get?
Hinds - Garden
Honeyblood - The Third Degree
Campfire Social - Breathe Out Slowly
The Vaselines - Son Of A Gun
TALK
Frankie Ford - Sea Cruise

Posted by Frank No comments:

Other podcasts and blogs you should know about: